Finally, a pair of socks. These were knitted to Kieron Pegg’s Toe up Twins on

Ravelry. They’re a little big, but as they’re for winter wear at home, we can get away with a bit of Nora Batty. The yarn was Bendigo Mills Luxury 4-ply, dyed with the two madders – see previous post.

They’re my first magic-loop-two-at-a-time project, but I don’t know if I saved any time with this method. The 40″/100cm cable was perhaps a little too long and the needles didn’t have a no-twist function…

’Ελα ρε πάιδι μου! can you imagine someone knitting socks in the 1940’s reading this? When it comes to problem-solving, or “first-world” problems, I just think, “What would they have done in the Blitz?’ Not sat around crying about twisting cables, that’s for sure. So let’s just say I’m up for trying different needles until I find the right ones from the wonderful selection we have these days that suit me. More on that to follow…

Dolly’s second outing on the same day was to model a shawl. Before I go any further, I should point out that this is not some weird fetish; the model is named after a real-life character from childhood visits to my grandparents’ in Battersea. No resemblance other than the name.

The pattern is Alina Appasova’s Pinwheels Lace Shawl on Ravelry, and the yarn is handspun Finn x English Leicester. The fleece had so many different qualities of wool, and typically instead of spreading the fleece and separating them, I flicked and spun several locks at a time before moving on to a different location in the bag. The pattern and the yarn gave a springy, lacy knit that holds its shape and is definitely for cold season wear.

see post below), and some of these blended. I had no idea how the colours would go together, and how I would achieve this, so in the end just went for knitting to the pattern until one ball ran out and choosing another, going down the scale from red to brown, dark to light, and finishing with darker and redder again. It worked.

This was given to the same recipient as the Wuthering Heights scarf, but as a birthday present in advance (to make up for the other one being late).

Last year I knitted a fair number of leaves from handspun (my own and a couple of balls of op-shopped) that had been dyed with plants and flowers etc. mentioned earlier in the blog. The pattern was from Crafty Galore .  It took considerably more time (until very recently) to decide how to arrange these together, and sew them, to make a scarf. So Kate Bush didn’t wear one in the video, an 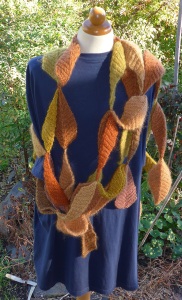 d she wasn’t walking through a forest in autumn, but you can imagine… 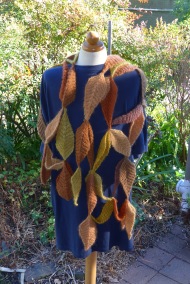 The leaves were sewn tip to stem, and arranged in a more-or-less plaited format. Worn, it can be draped rows-together or opened up more as a shawl. Either way, it was appreciated as a belated Christmas present and immediately coveted. Methinks this will be a one-off, however.

Make Rescues The Breed Of Choice!®

Musings on, and sometimes in, the Irish language

My weaving , my indigenous teachers, my inspiration, tutorials and more........