This was definitely on the list – a rare-breed, endangered, seaweed-eating sheep living on a Scottish isle. Who wouldn’t want some fibre to spin? Although there is a shop on the island that sells fleece in various preparations and colours, before I got round to ordering from them directly a local dealer was selling light-brown rovings at the Guild one day. Say no more. 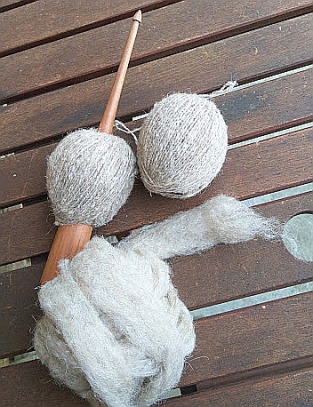 he roving was soft and lofty, but with some coarser guard hairs in it, and quite easy to spin. That’s taking into account the usual droppage. Someone “allergic” to wool – or rather the prickle factor – would probably not appreciate this one but I’m already thinking of how I can incorporate the yarn into a beanie.

I’ve found that my cops turn out more egg-shaped, but when I try to wind a round cop, the spin goes out the window and is replaced by a nonconforming wobble. I’ll stick with egg-shaped.

side end. I’ve also found that centre-pull balls/eggs etc from a drop spindle usually don’t work, even if turn them on a ball-winder. Oh well, at least you end up with a couple of egg-shaped cops that don’t need to be wound round a tennis ball before plying.

And the result? Two balls of 2-ply with all the character and interest of handspun and a bit more fibre left in the bag to be spun.