I’ve had quite a stock of dried pomegranate peel sitting around in the larder (I refuse to call it a “pantry” as most Australian-born do – sounds too much like something out of Upstairs Downstairs and we don’t have a maid). So, after obtaining a beige tone on alpaca yarn some time ago, I wasn’t expecting anything more.

I used 200% wof on wool, and chose the bits of rind with the reddest colouring. The alkaline

modifier (skeins 3 & 4) darkended the colours, whilst the acid modifier (5 & 6) lightened them. Skeins 1, 3 & 5 demonstrate that no mordant is required. Each shade obtained is, however, worthy in its own right and in real life all are far more vivid.

I had read somewhere that pomegranate, being high in tannin, is also worth consideration in making turmeric more light-fast… Wonder what it will do for alkanet? I just had to try, so in the dye bath mentioned in the previous post, six doppelgangers (that doesn’t seem right without the umlaut, aber ich bin sicher, Ihr konnt es mir vergeben) were thrown in for an overdye. 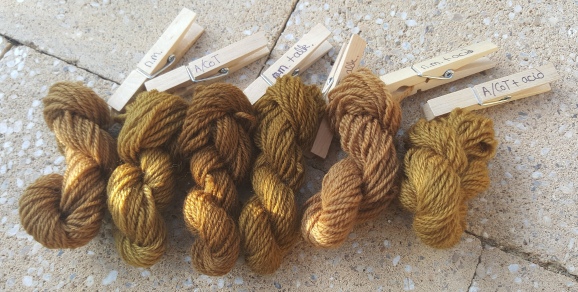 The original shades of pomegranate alone were strong and I suppose I should’ve repeated the experiment with yellow rind, and maybe at 100% wof. Oh well, let’s just shove some skeins in the pot and see what we get…

…more interesting shades with pinky (and perky) overtones. The light-fast testing will be interesting. Tomorrow’s been downgraded to 41oC (how cool…) whilst Sunday is still forecast to be 42oC. Even if it stays below that, there’s plenty of UV around for the tes 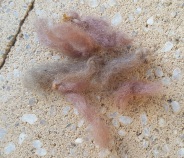 Just as an aside, I “marked” the pre-dyed pomegranate skeins with some bits of other wool. How did they emerge from the alkanet bath? GREY AND PURPLE! Grr!!!