It’s the time of year when I remind myself that if I don’t go and pick some green walnuts soon, they’ll be too hard to cut for nocino. Only last week we found two more “wild” trees while out walking doggie and another one on the way bac 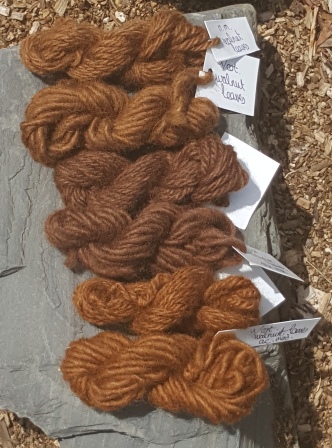 k from harvesting, so now that makes seven. Sounds like the making of a poem or song.

I also gathered enough leaves to experiment with dyeing. The results were interesting, even though at first I confused my mordanted with unmordanted samples. The unmordanted yarn was clearly “marked”, but produced slightly lighter shades. Ethel Mairet wrote that mordanted yarns produce a “brighter and richer colour”. I’ll definitely try again, and also with dried leaves. 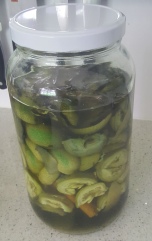 When the leaves were simmering, they smelled surprisingly like rhubarb leaves and did not take long to yield their colour into the water.

And the nuts? They’re already turning the vodka dark and bitter. After steeping for a month or so, the liquor will be strained and bottled and ready to drink this time next year. Well worth the wait!