The only specimen of E. amplifolia (ssp. amplifolia) I could find was a rather tall tree with branches high up and all fresh leaves out of reach. There were however plenty of dead leaves on the ground that hadn’t started to rot, so I scooped these up and went home with a bag full.

I simmered the leaves for a while, with a 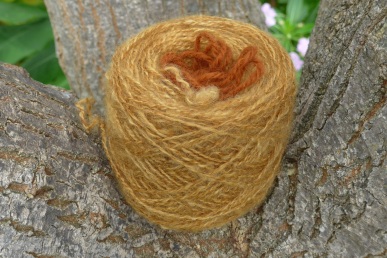 small skein (a tie, really) of commercial yarn thrown in (see centre of ball) – this came out a deep brown which was what I had been aiming for after consulting a couple of sources. The next day I added a full skein of handspun, plus two other ties of the commercial, simmered them for well over an hour and waited for the same brown.

As you can see, the handspun came out an uninspiring shade of mustard (I’ve since overdyed it with E. sideroxylon). The two ties, which have gone walkabout, came out two different shades of brick red. Conclusion? That the handspun, although carefully scoured, hadn’t been processed nearly a

s much as the commercial and therefore wasn’t as receptive (porous?). It was also thinner, and translucent.

More recently I repeated the experiment with a second collection of un-rotted leaves of the same tree. The handspun came out of the dyepot in two different shades of honey brown, while the commercial was darker honey, but nowhere near as dark as the first experiment. Maybe the leaves were more rotten than I thought?

I also experimented (some time between the two other lots) with no-/mordant and/or modifier to see if there was much difference.

Barely noticeable, so not one to repeat when contrast is called for.

There were a couple of small branches on the ground with fresh leaves that the parrots had been at, but not really enough to dye a skein with. Might try some leaf prints with these.

Chronicles of a humpy dweller