I was determined to try again for the red that is to be had from dock seeds, so tried fermenting some in water for a few days. Having read about alcohol extraction of Turkey Red, I later steeped 40g seeds in 300ml meths (+ water) for a few days, and then some more in water + ammonia.

The first two skeins were both unmordanted. The seeds were steeped in tap water for about five days. There was a whitish film on the surface of the water, so I decided it was either dye straight away or boil the mixture to kill off any mould, and risk losing the colour. The mixture was simmered for about an hour (maybe more) and was clearly reddish. The liquor was then strained over the skeins, and simmered for a further hour. It still looked red, so I tried adding some vinegar to see if this would help. It looked as though I’d simply diluted the colour, so added some bicarb quickly to offset the acid. The foam on top of the liquor was quite red, but the skeins

typically didn’t take on this depth of colour. Still, it’s the closest to red I’ve achieved so far.

I tried another lot in tap water and decided it was time to use them when the mixture started to smell of wee. I followed my usual routine of unmordanted, alum + CoT, unmordanted + alkaline modifier – bicarb, [alum + CoT] + alkaline modifier. The results were very different to the first try. The seeds were picked in different locations and the second lot may have had more natural water due to rain (the first lot 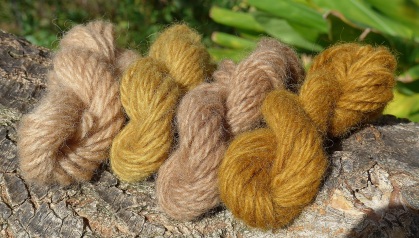 came from.the side of the freeway).

And those steeped in alcohol? No reds, but deeper colours than the second batch. I’ll try again next year and will harvest some unripe seeds on their stalks. Worth a go, and as they’re a weed it won’t matter.

Those steeped in water + ammonia had a skein of cotton yarn thrown in and left for a few days. Although the liquor was very dark, there was barely a trace of colour on the yarn after rinsing. Now, to dig up some dock roots…