I bought a punnet of bedding dahlias two summers ago (and again this summer just gone); they turned out light pink, dark pink, cerise, yellow and bronze, and produced an abundance of flowers even on plants only 1′ – 2′ high, so will stick to these in future rather than growing the taller varieties that need staking and perhaps more shade.

Thanks to a generous harvest, I was able to dye with both flowers (dried) and heads (minus the petals) to see if there is any difference – it’s stated in The Woolcraft Book that the colour is in the centre of the flowers. 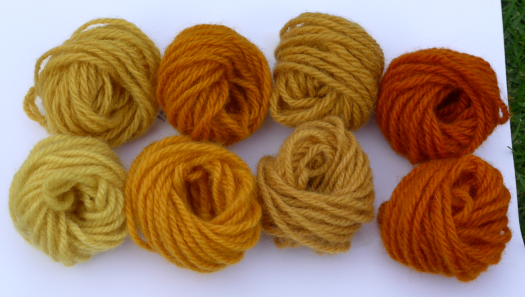 The flowers clearly produced deeper shades, but maybe the quantity of viable dyestuff was greater considering how much % of the heads was water.

I’m often asked by fellow Guild members, “What about tree dahlias?” I tried experimenting with the leaves last year after one of the canes blew down, but with disappointing results. However, I’d saved the flowers from that cane and they’d been hanging in a bag on the washing line for the best part of a year – dried, shrivelled and light brown.

They produced a tea-coloured liquor after simmering for about 3/4 hour, so I decided to go ahead. Had I mordanted the yarn? Couldn’t remember, so I just dropped a skein in the pot. After about 30 mins I added a pinch of alum, and the yarn turned visibly darker. That answered my question. Then some bicarb turned the yarn a rich orange-yellow (deeper than in the photo). So, that answers the other question and I shall be saving as many flowers/heads as I can this year.

Make Rescues The Breed Of Choice!®