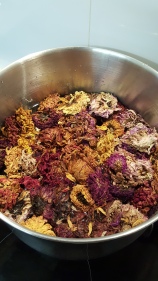 I only had a few small dahlia plants in the garden, but a local enthusiast came to the rescue with what must have been about five kilos of freshly lopped flowers – plenty to experiment with. I don’t know what percentage of the weight of a fresh flower is water, but as they dried, so it became clear that 5kg wasn’t going to go as far as first thought. However, the results were pretty amazing.

The first dyepot contained 220g semi-dried flowers in darker shades, simmered for an hour. After straining the liquid, I added two skeins each of 50g commerically-spun wh

ite alpaca, mordanted  with alum at 10% wof. They were simmered for another hour, then one skein was removed. A generous spoonful of bicarb was added to the pot, turning the remaining skein copper. I wasn’t able to repeat the effect with the remaining dyepots, but got very acceptable results nonetheless. The photo shows them paler than real life.

The second picture shows the same yarn mordanted with alum/cream of tartar 50:50 to 15% wof, then dyed with dried pomegranate rind. It came out much softer; maybe because of the CoT? Not an inspiring colour per se, but blends in well with the dahlias for a warp.