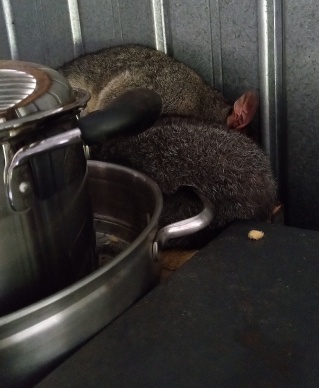 I’ve got used to the possums now – both mother and baby – sleeping in the shed behind the dyepots. Even when they’re on the next shelf down when I go to grab something, I don’t jump as far backwards or gasp quite so loudly.

They’re not doing much harm, although there is plenty of evidence of chewed shelf. And all the pooh… we thought it was rat pooh, but maybe it was mum after eating all those harvested plums in the shed and leaving the stones in a neatish pile. That makes sense – I doubt a rat or even two could eat that many plums. 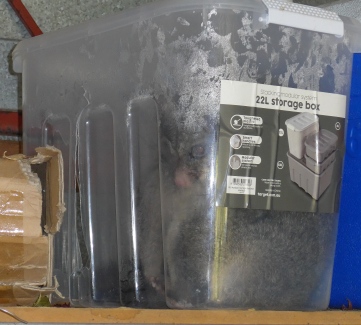 It wasn’t until I was looking for a storage box that appeared to have some stray balls of yarn in it that I found their latest nesting place. Now, before you all shriek and wonder if they can get out (you’ve probably already shrieked in the time it’s taken me to type), there’s an entrance/exit in the back that they managed to chew, and also a crack in the side of the box where it no doubt gave way when they were getting more comfortable. Entrance, exit and ventilation. They’re not stupid, you know!

A few weeks ago, the younger one came down the tree and sat in the fork where I sometimes pose the yarn for photos. It sat looking at me, almost at eye level, and I could have tickled it behind the ears. One thing I tell my students is not to touch possums unless you fancy your fingers bitten, but this one looked so friendly and clearly wanted to communicate. But wild it is, so I resisted the urge to make close interspecies friendship and tried to encourage it back up the trunk so a certain puppy wouldn’t try to overwhelm it with the same close interspecies friendship.

They were in the tupperware (it isn’t the real deal, but you grow up with a certain vocabulary…) again today, so I guess it’s their winter hang out. Touching the side of the box, it was snuggly warm. The condensation in the photo only appeared after they’d stirred. My bad!

3 thoughts on “There were two in the shed…”

Make Rescues The Breed Of Choice!